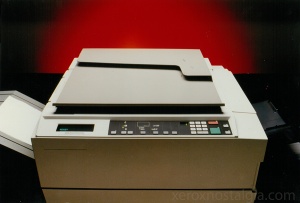 Four modes of reduction and two modes of enlargement; makes 20 copies a minute. A3 copies; 12 copies per minute.

A3 original could be reduced to a manageable A4 size for filing or for inclusion in reports. Or a section of a document could be enlarged to make fine detail easier to read. For easy referance the reduction facility can copy 'pairs' of documents onto one A4 sheet. Or use a combination of enlargement and reduction to suit the your needs. Two paper trays, of 250 sheets each, gives push-button selection of any two sizes from A4, B4, A4, A5 or non-standard copy paper.

The Xerox 1035 was a Fuji Xerox designed product, and was assembled in Mitcheldean and in Nigeria according to Rank Xerox International Report of 1984.

The 10 series represented a new generation of copiers. This became the most successful line of copiers in Xerox history and served to restore the company's finances and morale. The flagship Xerox 1075 became the first American-made product to win Japan's Grand Prize for Good Design. Altogether, 14 models were introduced between 1982 and 1986, six of which were still sold in 1990.