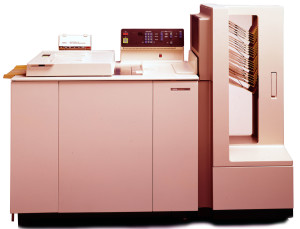 The 5400 had brush development, a vacuum style drum cleaning system like a duplicator, a much more robust and heavy document handling system, and a microcontroller system control, much like the 9200 family. A sidecar on the left side of the 5400 housed the drive motors and support for the document handler and the collection box for the unused toner from the drum cleaning system.

45 copies per minute, first copy in less than 7 seconds in non-sort mode; 7.5 seconds in sort mode

These guys were constructed with a heavy iron frame, and were built to last. They were pretty good when maintained properly. There was only one problem, which many of us considered hilarious: they were prone to tower explosions, causing the cabinet door to blow off! This happened in the White House causing a great deal of consternation. Veery early in Reagan;s first term, if I recall correctly. Friends of mine in the Federal Branch confirmed that this seemingly apocryphal event actually happened.

Correction to above: they were prone to TONER explosions. Clouds of the highly volatile plastic-and-ink toner would accumulate and, set off by sparks or electrostatic discharge, detonate resulting in a loud BOOM and sometimes the cabinet doors blowing open or even completely off the hinges. I never heard of injury or property damage.

Another feature the 5400 had was bi-directional sorting. Unlike the 4500 that used a less than 8 switch (that would dead-cycle the machine until the sorter bins reset back to home) the 5400 delivered the copies as the bins move both up and down. This improved the output time of the copies.