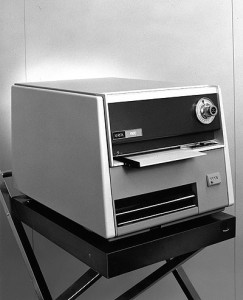 In October 1966 Xerox announced the Xerox 660 desktop copier, which was a improved version of Xerox 813. To make a copy, you entered how many copies you wanted, and then fed the original into the machine. The original came out in a slot in front of the machine, and the copies came out of a slot right beneath where the original came out. Obviously one couldn't make copies from a book with this machine. The Xerox 660 made 11 copier per minute.

The paper path inside the copier was quite simple. When the paper left the paper tray, a “gripper bar” with two clips opened and grabbed the paper and transported it under the drum, and through the fuser. The fuser unit was not a heat roller, but a heater lamp, and the paper passed under this heating lamp, in order for the toner to melt into the paper.

If anyone has more information about this model, or have brochures / pictures, please leave a reply in the form below, or send an email to xeroxnostalgia@outlook.com

I was a service rep in the 70’s and 80’s, and we were very fond of these by-then-outdated old machines. They were of course not designed for high volume, they were, instead, a small office fixture. They made VERY high quality copies when well-maintained, however, and were just unbreakable. They just ka-chunk ka-chunked right along like an old steam engine. As the article above states, they had a heat lamp fuser, and occasionally the paper would get stuck and smoke, but, due to the air flow, seldom if ever, actually catch on fire. Kit really depended on the operator to… Read more »

Jim – You are right — it did make excellent copies. For the longest time, I had one of these that I rescued from my dad’s office in the 1990’s. It still ran well, but, I could no longer find a supplier for the cotton Webs for it, (even though I had 2 cases of dry ink) so I gave it to a guy. I kinda wish I had hung on to it — from time to time, I see Webs for them pop up on eBay or other sites!! I once told a Xerox Rep who serviced our 1990’s… Read more »

LOL about the free fire extinguisher. A bank in a medium-sized Texas town had a 660 in the early 80’s they just kept just because it still worked. They called for servce statng that “the paper keeps gettng stuck and catching on fire”. Another tech rep and I were riding together because it was lunch, and we took the call. We drove into town, down main street, and around the corner to the bank, and damn there were about 5 fire trucks, cops, fire hoses running across the street, people, running back and forth. We were like “No! It can”t… Read more »

Hi to all from Cape Town South Africa. Retired now, I also started my Xerox career as a 660 tech. Just to add that the messy web cleaning system was later replaced by a rubber “doctor blade” system which cleaned the drum in much the same way as a car’s windscreen wiper cleans the windscreen. Regards.

All supplies and parts for discontinued Xerox copiers, duplicator etc. products are available from The Parts Drop. I owned a 3100LDC, then a 1020 (smallest Marathon Copier model) now I have a 5335.

You don’t happen no know of any old Xerox copiers for sale? Has been looking for a long time for a Xerox 4000 copier to buy.

I keep antique models of office automation and I do have a RANK XEROX 660 with me for sale.

Hi Gary,
Could I get in touch with you about possibly seeing what antique xerox machines you might have for sale? Thank you, either email or phone would be great.
Best,
Mimi

I worked on these in the 80’s. Xerox went through a fallow period, and actually reintroduced a variant of these. The awesome error: the machine had a lever to take the tension off the gripper bar chain so you could remove the (xerographic) drum. Everybody, at least once, started up the machine with the lever still in the service position. The gripper bar would shatter all three fuser lamps, then bend into a u shape. What a pain that was. You really tried not to do that twice.

Thanks for your reply. When Xerox reintroduced a variant of the 660, did it still had the same model number 660? Or was that the 813?

LOL Clark I forgot all about that, starting the machine with the grippers down. I never did but everyone else I knew did it at least once.

I serviced the Rank Xerox 660 many years ago, along with the RX914/720 and the RX3600/7000 models. I have field service and key operator manuals for several Xerox models including the RX 660. I recall one amusing event when I was demonstrating to a young female operator how to remove a document jam from inside the machine. Upon finishing the demo I flipped up the side panel catching her pleated skirt causing brief embarrassment to us both followed by a good laugh. This only ever happened the once.

Graham If you still have the 660 Service Manual I would welcome a contact. I am still working for Xerox out of Uxbridge after 41 years so can be contacted on Trevor.ford@xerox.com or +447730015464
Trevor

I worked on all the old stuff in the 70s. 914, the original automatic copier 720 replaced the 914 1000 replaced the 720 813 original table top 660 replaced the 813 I also did duplicators like the 7000 The 4000 was the first electronically controlled machine. The 3100 was the first to use a magnetic brush for developement and the clam shell design now still used on copiers and printers. Poor Xerox had many good ideas but internal politics kept the company from ever being great other that the flash in the pan success in the 1960s. Some fun notes.… Read more »

In Britain (don’t know if it happened in the States) but these were modified via an image capture system bolted to the top of it to become a Microfiche printer, each image had to be set up manually and a fiche card could hold anything up to 300 images a job could take days!..

Ah memories!!! The bliss of replacing the meter switch where you turned the whole machine on its side to remove the bottom panel – remebering to remove the cascade developer first of cours. I recall my product training course was learning how to reset the Time-Out Cam in a phone call to a “specialist ” 200 miles away I have just found one of these and having it shipped to the UK to restore in retirement. It will sit well with my 6085 / 4045 Documenter 5014 copier and 645E Memorywriter Of course if anyone has a copy of the… Read more »

What a trip down memory lane this Website is. I joined Rank Xerox Australia in January 1979. The 660, along with the 3100F machines, were my introduction to photocopiers. I have worked on a wide range over the years including the 6085/8000/8090 servers/workstation as well as the 850/860 word processors and decentralized laser printers. Currently in my 38th year, now with Fuji Xerox, I support the range of office MFDs. I remember having to reset the TOC as Trevor mentions above. Primitive by today’s standard yet good machines in their day. Any one remember the 3450 and its horrendously noisy… Read more »

Hi! Can anyone tell me what is the function of the dial? It’s to select the amount of copies?
Thanks!

Great! And why the distance between 1 and 2 is longer than the others? Thanks!

Good question, but I don’t know.

I have many spare parts and supplies for the Xerox 660/813 copier.
http://www.typewriter-muzeum.pl

Hi all Xeroids…I joined Xerox in 1972 as a CRO (Customer Relations Officer) and drove all around in my little Mini training customers how to clear paper jams and put out the fire. I loved it, even as the products changed and got more complicated, it got better and better. I retired in 2006 and although I love my life now, I still think of my years with Xerox with lots of love …how lucky I was. Linda x

I worked as New Business Executive ( AKA Door Knocker) in the early 80’as and Roger Morgan was my District Manager. A great guy who taught me a lot. I’m sure he’s still living and breathing Rank Xerox to this day.

Roger Morgan taught me how to sell on joining his team as an NBE in 1979, Birmingham. My first demo and sale of the 660 was to Hagley Hall. Starting as a trainee and assisting the likes of Bunny, Terry and Roger Gaunt to lift the 2202 and 3107 up flights of stairs to demo is one happy memory. Crazy days and great fun.

Hi Ian, how are you? What are you up to these days? Did you know that Roger passed away two years ago?

The machine doesn’t work. According to the previous owner, a condenser needs to be replaced.

Is the copier still for sale? I would like to buy it

I have manual for Xerox 813/660
also spare parts and consumables.

I was a Rep for Xerox in Portland Oregon 1977-80’s. We used to give prospects a trial on everything 660,3100’s, 4000’s all the way up to the 8200 and 9200. If you’re tech went in and set up a machine. It’d serve you well to close the sale. I remember our team putting out 23 trial in a week and closing 22. Harrison Square was a great branch. What a great experience!! I was a 23 year old kid with no cooperate background. Best decision I made as a youngster coming out of school. Grest memories. And those parties😂

Dear RX peoples,
Ik have a complet RX 660 with extra drum etc.
If you have intrest please send me a mail.
Regards D van den Bogert