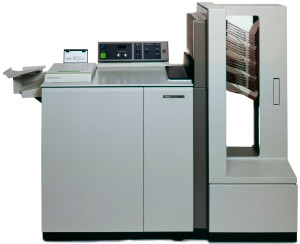 When more than one copy to more than one person was needed, sorting was necessary. The 4500 sorter operated online, gathering one-sided and/or two-sided copies. This means that when the copying was done, the copies was in the same sequence as the originals, ready for distribution. Hand collating was eliminated, and the total job time was shortened to just about the time it takes to make copies.

The Xerox 4500 had something they called "Total recall" (from the brochure of 4500). The capability to remember where each copy was located when a job was interrupted.

What a electro-mechanical monster! And dirty… The worst part to replace was the “A” transport (I seriously think that it was invented and the machine was built around it. ) Then the helix gears, the fuser gears, and last but not least…The VACUUM BOX adjustments.

Electromechanical monster sums it up perfectly! In Raleigh NC where I was based, an A-transport repair was an all day job. The 4500 was basically a 4000 with a document assist device stuck on the platen glass.We tech’s were hoping for mag brush development and effective drum cleaning but that did not come along until the 5400 variant. Also, the arrangement of the sorter bins was rather “Mickey mouse”, to say the least. once, one of my operators left a stapler between two sorter bins while clearing a paper jam . When the machine was restarted , the resulting disaster… Read more »

Come on guys. The 4000 and 4500 were my favourite machines. I worked on them from launch ’till I moved on to 9400/9500 and later 9700s. I was Technical Manager at our Cape Town branch in South Africa. My Senior Tech could remove the A transport in 10 minutes – (we timed him in front of our National Technical Manager during his visit). With many new innovations, this family “groomed the techs for the bigger machines – (see my 4000 comments).

Lets not forget the fuser oil hose mounted right above the bead chain drive so that when it leaked
it would carry the fuser oil to the developer housing then to the drum and if it hasn’t bound up by then it would put the rest into the auger assembly resulting in the clicking noise and Dr. blade streaks. Ah yes, fond memories of the good old days.

The Fuser oil hose did need to be replaced periodically. There was a sticker that came with the replacement hose to help monitor when it should be replaced. Any indication that it was turning yellow was a warning sign to replace it. It only took one failure and you learned your lesson to never let it go unchanged.

Usually A Transports had to be replaced due to roll melted by a mix of heat and silicone vapors, in Argentina we used to replace them with two Reps working at the same time in about 3 hours.

Register rollers were done from the front..no need to pull the “a” transport..just some cut knuckles and a special drive punch..oh yeah, and a modified ball peen hammer..