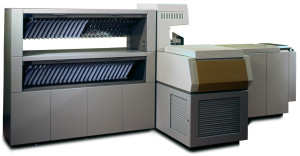 April 1974: The Xerox 9200 duplicating system offered automatic document feeding and collating, reduction and double-sided copies, with the speed of two copies in a second.

Did you know? The design name of the Xerox 9200 was Ardrii

Xerox 9200 operating panel, and descriptions of the different functions.

Reduction: there where three preset reductions one could choose from - 98%, 74% and 65%

Fatures
Auxiliary paper tray - this was used for enabling the 500 sheet paper tray. An example of this could be when the machine was producing a large single sided series with copies, and the main paper tray was almost empty. You could then load the auxiliary paper tray with paper, push the button "AUXILIARY PAPER TRAY". The machine then started to feed paper from the aux paper tray, and you could then load paper in the main paper tray. By doing this, there was no stop in the production.
Light original -
Colored background -

Sorter
Job supplement - if someone needed a few copies, and the machine was in the middle of a large series, you could put the job on hold and let others make a few copies.
Sets - for sort and make sets of a document containing several pages, one could enable this function.
Stacks - lets say you should make 3000 copies of one single side. Instead of have the copies come out of the main output tray (which could hold up to 250 sheets), you could stack the copies in the sorter. 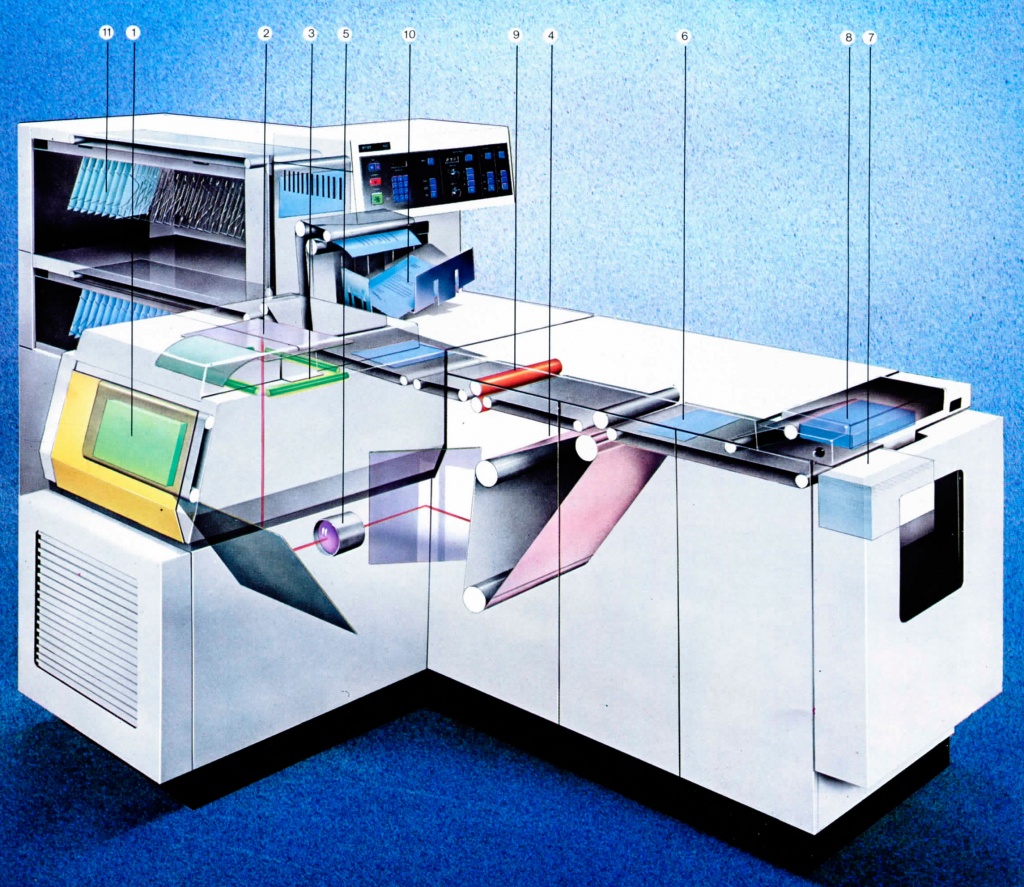 The automatic document handler (1) holds up to fifty documents for automatic feeding and scanning. Alternatively, single originals can be placed on the flat glass platen (2). After exposure to the four flash tubes (3), the image is directed onto the xerographic belt (4), via the zoom lens (5), which can adjust the image size from 61.5% to up to 102% of the oroginal size. The xerographic image is transferred to the paper, which has been fed along the straight paper path (6) from either the main paper tray (7) or the auxiliary tray (8). The image is fused (9) permanently to the paper and the finished prints then collect either in the receiving tray (10) or are automatically collated into sets or stacks by the 'limitless' on-line sorter (11).

My dad had one of these in the general offices of the railroad where he worked. When he would take me in to work on weekends sometimes, I was always making copies of my hand, my face, etc., and he’d even let me copy things he received on his old Xerox Telecopier (I think they call those fax machines nowadays…) at the office that he had to distribute. I think that was responsible for my present-day office machine geekery.

When we launched the 9200 in 1972, all we had was analog machines, 2400,3600,914,813,etc. This and the 4000 series were the first digital machines with actual printed circuit boards controlling the functions. This was new to us in service, and we had to learn a new technology. The magnetic roll development, introduced on the 9200, is used today on most machines, and was a development of 3M company, licensed by Xerox.

Hi Daryle, You must have worked in NYC. I understand that was one of the first launch areas. (I started just after launch of the 9200 in the Western Region on the 9200 “New Hire Program”, 3rd. Quarter ’75) As you experienced, the 4000/4500 family first, then the 9200 were Xerox’s first digital “controlled” copier or duplicator. It was explained to me as a new hire that Xerox invested more money in R&D for the 9200, than Boeing spent for their newly introduced 747 jetliner. Xerox had fully gambled on the 9200 program. I remembered how pressmen hated the 9200,… Read more »

The development of this machine – precursor to the 9400, 9500, 9900, and 8200 – was a truly massive effort buy Xerox, one of the largest and most expensive commercial projects ever undertaken. The field service force, of which I was a member, was at this time one of the most highly-developed logistical operations in American business.

The development and release of this machine also marked,, sadly, the final hurrah of the glory days. It was all downhill after this for many, many years.

Also, although the article above mentions a 1974 release, I could be wrong but I don’t remember the 9200 being generally available until later in the 70’s.

I was selling the 9200 (or not selling it, as the case might be) in 1975/76 and it had been out for a little while before. We were marketing it as a cleaner, less expensive alternative to the printing press; print shops and the craftsmen who were running the presses resented it.

My first actual practical dive into the use of Boolean logic: flip up that card cage and install those jumper wires in the matrix to turn components on and off to troubleshoot wiring problems, dicey jam switches, and…and… wow, this was a fun machine! F_U_N _ !!! Except when you had to adjust the corotron currents, the BTR voltage, replace the flash tube trigger wires or the burned out flash tube end blocks in the optics cavity, replace the developer module roll rack chains and gears because the spray of developer from the lousy foam seals that acted like abrasive… Read more »

Writing as an end-user rather than an engineer we found its document handler was fundamentally flawed in that it had to be loaded vertically from the front which meant the original was sent on a non-straight path and used to jam quite a bit on the bend, but what a machine when they worked, the 94/9500s were superb kit. I was sent on the “advanced customer training” (act) course, to Newport Pagnell, a two week residential to supplement the maintenance of them, probably the most enjoyable 2 weeks I ever spent with Xerox.

I had just joined Xerox and trained on the 9400 when the movie “9 to 5” was released. As soon as I saw it in the movie, I said to my wife, “that’s the 9400 I just trained on… but they’ve added a bunch of extra flashing lights to the UI” Of course, when the machine goes nuts I about died laughing!

A very exciting company, and group of people I still call my friends. I will always appreciate the opportunities I enjoyed with my 20-career with Xerox Corp.

I worked in the concourse area of Xsquare. I was selected to be the “key operator” of the new secret machine being delivered. Armed guards, a secret room was constructed in Melvina Schmidts print shop, we had AB Dick duplicators. Xerox wanted to compare 9200 prints to the offset duplicator prints. 2-3 months in that room with 3 cameras, 2 3/4 in video tape recorders, and a note taker named Jan. She recorded every job, every jam. if I dropped something she noted “dexterity lapse-“. The design name of the Xerox 9200 was Ardrii, not Ardry, not Audry. It means… Read more »

Thanks for you correction about the design name of the 9200. I have now changed it to Ardrii.

I can’t thank you enough for posting my post. My mom will be glad to see this.

I was a Rank Xerox Work Controller (service engineer dispatcher) at Denham (near London) in 1976-77. Most of us were assigned to a geographic area, but we had one controller who was assigned to the 9200 across the whole region. Her job was to get a rep out to the machine within two hours of a call. Given the staffing the rest of us had to call on, and a problem (crisis?) we had with MTBF at that time, we struggled to get out to other models in two days.

I ran one of these in 1985. It was a great copier. Loved the ADF, belt drum, and the sorter. Also had a service key to bypass the interlocks. No one would let that happen today. We called it E.T. ET only had one issue.. the fingers on the lower sorter started to rub on the belt rod.. about three months later, it had cut the rod and caused a big BANG!!!!.. This is how a machine should be made.

Oh boy, the 9200. Hired as a tech rep in 1980, my first class was in Leesburg on the 9200. 6 weeks long. We were professional, coats and ties were the norm for daily wear at XICTMD. “You are the elite… If you are in this class, you are working on the most advanced Xerographic product ever invented. Our customers depend upon you for their service, and by proxy, their business and profit. When our customers are pleased with us, it is because you have listened to them, responded to their needs, and met their requirements. You will not find… Read more »

Hired into “da loop” in Chicago Sept ’74 into Dups, 2400/3600/7000 as replacement for Senior techs going to the “it’s a miracle” machine. Being in Chicago Loop Brother Dominic made quite a few visits to major accounts and kickoffs. What a time it was and 43 yrs later we still consider it the best company back then because we were family. XICTMD is long gone, I think I spent @9 months there all together. Now it’s all plastic and sub assemblies.

This was the introduction into production copying/printing.
The 9200/9400 was, electronically, a fun machine to work on. It was a bear mechanically. It did, however, usher in the beginning of the end for the offset press. I was hired in Mid-Town Manhattan as a tech. I am still in production printing, albeit with Canon now, in the workflow software arena.
Thanks for the walk down memory lane!

I came on board with Xerox in 1976 iwith the 9200 in the Miami Branch. Best career choice ever! It was a great time and a great product. The training at Leesberg was second to none. I can remember just how massive it was and the sheer volume of paper it consumed, 7200 copies an hour. The main tray held 5 reams of paper and the aux tray about 250. The ADH (Automatic Document Handler) could be a bear to adjust, but when done to specification, it worked better than anything else on the market at that time. The photoreceptor… Read more »

The 9200 was released around the 2nd quarter of 1975. I was the 6th person trained in the NYC Manhattan area. Leesburg was a new facilty, and it was running double shift to train up all the techs that were needed for the product.

I joined Xerox in mid-1975 as an HVSE, selling the 9200 in Dallas. I loved the “Warm-up” film we had of H.G. MARSHALL,narrating a demo of the system, set to a Beethoven concerto. I’ve tried to find that video on YouTube or other internet sites, but no luck. Anyone know where I could find that?

Throwing my hat in the ring; My first job in this industry was as a 7700 as well as a VanDyk 4000 operator for the Vydec Co in Florham Pk, NJ. A year later we upgraded to the newly introduced 9200. I remember early on they had to bring in a tiger tech to deal with malfunctioning solenoids in the collator which instead of opening and closing in succession would just operate randomly causing all sorts of collation issues. A year later after moving it to a larger room we couldn’t figure out why there were large areas of deletion… Read more »

I’m 65 now. I was told I was the most productive operator on the 9200 in the nation. Xerox hired me, and I was part of the 9200 team in Santa Clara California. The only competition we had was from Kodak.