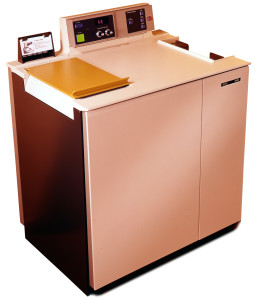 In 1970 Xerox introduced the convenience copier Xerox 4000. It was a compact and quite copier, with two paper trays. This was the first copier in the world, that could copy on both sides automatically. The machine was also well suited for copying from bound volumes. Its exposure platen came right up to the edge of the machine allowing individual pages to be copied without having to open the book hat.

Later on the 4000 was produced with automatic or semi-automatic document feed, wich was a great success, especially in business offices for copying multipage unbound documents. This one feature changed the general configuration of copiers to the extent that there has never again been a true edge copier like the Xerox 4000.

In 1970, automatic density control (ADC) sensors were introduced with Xerox 4000 duplicators and subsequently used in various forms in the 5600 and 9200 families. Using the ADC sensors, somewhat frequent manual adjustments were made to the toner control

Thanks for the memories! In 1972, i was hired as a service tech by Xerox and trained on the 4000. It had a remarkable feature set for its time- auto-duplexing, automatic density adjustments, dual 500-sheet paper trays, and fast duplicating. From a service standpoint, it could be a beast: a woefully underpowered drum cleaning system (when the doctor blade wasn’t going bad, the recycling chain was locking up), a developer housing that required regular micrometer adjustments to keep from scoring the drum, and a complex forefront set, one of which would.occasionally spark and cause random logic malfunctions. As another said,… Read more »

Correction in next to last sentence forefront set should read “corotron set”.

I still suffer from two 4000-induced medical conditions: “4000 knees” and “A-transport replacement lower back pain”! Thankfully I don’t have toner lungs, and I was finally able to clean out my fingernails!
Oh yeah, also lucky to never get my fingers caught in the main drive chain!

The trick was getting the dev. entrance chute to .008 inboard and outboard, along with the charge, transfer and detack wires. It could actually do fair solids! Take the rear exhaust fan and turn it backwards while taping the air filter to the back of the machine to filter air going into the machine. Mirrors kept collecting dust too quickly. Snipping the ends of the doctor blade to make them go thinner at the end foam gasket., kept toner from creeping down into the charge corotron. Final impression was that they put the prototype into production, as there wasn’t a… Read more »

The biggest single improvement to overall copy quality was having the Vacuum box and stationary extension properly adjusted. using the electrometer for charge current adjustment was important too.

I worked on the Xerox 4000 series for many years, starting very shortly after it was introduced. That was in Hartford, Connecticut, the branch that was the test branch before general release. Yes, it was a challenging machine to work on, but if you kept after it, and if you had good key operators, it was a very good machine.

Early phase 4 machines were released before they were ready for market. Remember soldering in many polystyrene capacitors and frequent tripping breakers. Phase 5 model 4000’s was a major improvement. Bead chain recycling greatly reduced toner cconsumption but was a nightmare to keep it working. “Total Call – MARS – LOLOS” with critical adjustments returned many difficult machine back to good operation. The metal drum storage cans was great for canoe camping. Cleaned out Collapsible plastic developer containers had many uses. My dog loved to run after the black feed rolls. Yes – and be very careful not to have… Read more »

Is this the Bob Easterly I knew in Webster? I do not remember ever knowing you were a 4000 veteran! My first Xerox school was for the 4000 back in ’73… 45 years ago… Sure doesn’t seem like it. Hope all is well with you.

Bob Easterly, sounds like a name from the early 4000 days in Webster. I recall you when I managed the 4000 LCE team for Phil Hyatt. It’s good to see you remember all the joys the 4000 provided to the Tech Reps. It did provide me with continuous employment on the Quality Improvement Team,

I hated this product! After almost 4 years on Duplicators I was sent to these. in 6 months I was on disability due to lower back issues. My doctor figured out it was because the drum cavity was 1/2″ off the floor and the constant reaching and torqueing took its toll. A couple things always bothered me as well… 1. why oh why put exposure slot UNDER the drum, along with mirrors? hadn’t anybody in design ever hear of that new discovery… GRAVITY? 2. trombone reclaim was a joke. every one of them had a plug of yellow toner stuck… Read more »

under #2 it was supposed to read yellow towel…

are there any of these machines still working? (Dumb Idea of the Year, I know) or even not working but sitting as historical objects?

The Local University (Carleton) had made a special plaque on the wall with a 4000 fuser mounted to it and a nice overhead glued to it. Note said…’Another successful experiment in Fusion’.

Anyone know of a schematic for the 4000 machine?

Great! I will be in touch.

I have a brand new drum in a tub, no box, anyone need one?

I LOVED this product as it had a lot of new features that “groomed” techs for the bigger products. I was a Branch Product Specialist (BPS) and later technical Manager at our Cape Town South Africa branch, moving on to 9700s. Techs in SA had to be trained on the 4000 before being considered for 9400/9500 training. Many techs disliked the machine but as a team we mastered it. My senior technician could remove the A transport in 10 minutes flat. Later, when the machines went into workshop for refurbishing, holes were cut in the rear frame to replace the… Read more »